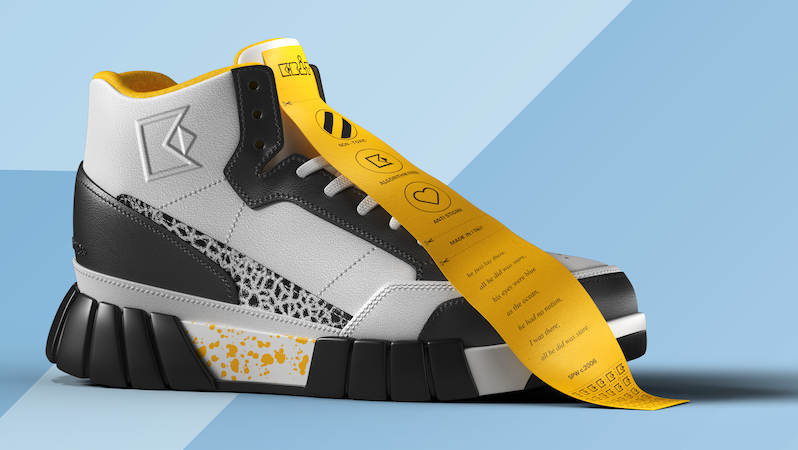 Digital dressing for the Global Majority

Imagine building a new world from the ground up. In a sense, this is what we are doing collectively with the Metaverse today. There is, in theory, space to deconstruct the power structures of our physical world, shift values, consider the elements necessary for meaningful decentralisation, and otherwise reimagine how we connect and why.

Conceptualised by EBIT™, Eco-Age CEO Simon Whitehouse’s creative collective exploring mental health, and Novelmodels, the rising modelling agency launched by Adrenus Craton to challenge the ethical standards of the industry, the campaign features ten new face models from locations ranging from Accra, Ghana to Angola, London, and Kenya in a range of ten shoes deconstructing and merging once stratified codes of footwear. The campaign highlights virtual products, allowing the global majority to move into the centre of the creator economy.

“I am tired of the same influencers in campaigns, spoilt with lavish gifts etc. We felt an alternative way to bring a message and a product to life, and that in fact with virtual fashion so many barriers are lifted,” explains Whitehouse. “Talent from the global majority who would almost never have the opportunity to work with a fashion brand before due to logistics etc could build their own brands or their reputation by specializing in digital dressing.”

The shoes are from EBIT™’s Spectrum of Footwear—blending elements from footwear staples, from a classic high top to a Chelsea boot, a wedge-heel and traditional sling-back, to birth new, postmodern styles. They reflect a shift in fashion over the last 20 years in which once sharply differentiated categories have progressively dissolved. Alongside this movement, the styles reference a parallel shift in how we diagnosis mental health conditions. Just as shoe categories have become less stringent, mental health diagnoses have moved away from an individual diagnosis representing an entire identity, giving way to an understanding in which individuals may experience elements of overlapping conditions. A clog morphs into a mountaineering boot; elements of depression and schizophrenia may coexist. Spectrum of Footwear comes to life virtually and physically; a respectful reference explores two shifting conversations in subtle, imaginative form.

The campaign also represents a new approach to modelling.

“The point was to make it a place where eventually every model in the industry would feel like doing things for a reason for a purpose,” says Craton of the origins of Novelmodels, her agency which only represents talent who are purpose driven and working with ethical clients.

“I didn’t have a traditional start in the fashion industry,” reflects Craton. “I came from an art background. I was an artist from childhood. We all are. Then life happens and we forget. But I tried to keep that with me.”

Novelmodels was born when Craton was working in Poland— “it was an accident,” she admitted—and helped a friend create a modelling book for prospective agencies, only to discover the friend was too tall to be considered by any traditional agency.

“Nobody wanted him,” she says. “It’s a novelty what he had. Uniqueness should be a novelty and not something that’s [a cause for] rejection. [I created] a very different concept [in the industry.]”

Celebrating the qualities that make us beautiful—our differences, our novelties—formed the basis of Craton’s scouting, alongside a commitment to injecting and owning a purpose-driven conversation.

“I wanted it to be like a whole new era, right?” says the Texas-born artist. “There was a supermodel era. And this is my Novelmodel era, where people are doing things for a reason. They have a purpose: They’re going to have a positive impact.”

Web 3.0 could have transformative potential for our physical world.

“As fashion’s obsession with metaverse and virtual fashion continues, we could facilitate a seismic shift in power from established influencers and talent in the global north to a new generation creator economy in the global majority,” says Whitehouse.

This could also be an era in which creators are no longer seen largely as clothes hangers for brand marketing, but rather meaningful stakeholders—which we all are—in a wider conversation over our collective future.

For Spectrum of Footwear, Gianna sits on her bedroom floor, sharing her own approach to mental health. Gideon speaks about supporting a friend and the new possibilities within and intersections between mental health and digital dressing. Ning poses in the streets of New York and contemplates the impact of the pandemic and how to move forward.

Below, meet each Novelmodel in the campaign, who have shared their perspectives on what mental health means to them.

“…the trend of “fast fashion” has promoted wasteful textiles that continues to deteriorate our environment and the lives of the youth today. In an already stress-abundant world and as climate change continues to affect the quality of our resources, I’ve realized that the ignorance of mindless shopping can take a huge toll on one’s own brain personality, or in other words, our mental health. …To me, a peaceful mentality is something that embodies you completely… However, it doesn’t always have to be all rainbows and sunshines – a healthy mindset is also the ability to be resilient despite the challenges we face and maintaining a good balance between the good and the bad experiences in what we know as ‘life.’ …At the end of the day, I know this feeling is temporary and I am not alone in this world… I am excited to collaborate with EBIT™ to experiment with a new era of ‘digital fashion’ – a sustainable, eco-friendly way to reach consumers through awareness and sensibility as we make Earth a better place for all.”

“The Christmas of 2015, I lost my dad, and my whole world came tumbling down… After our dad’s passing, we had to relocate to Paris, which meant I had to say good-bye to my school, my friends, and the other connections I had made while living [in London]… Everything happened so fast, I never really had time to grieve what I had just lost. I got really angry, my self-esteem took a hit, and I fell into a depression for a few months. During those months, I just stayed in one place barely ever wanting move or interact with people. …Making friends was really tricky, seeing that there was a language barrier, but as time went on I found my little clique of people. We barely understood each other, but we connected on things like sports, music and fashion… After almost a year and a half of this, and losing interest in school, I was finally allowed to come back home to continue my studies in English (Ghana). In the time that I’ve been home, I’ve managed to grow my modeling career into something I can be proud of…I’ve become a part of various foundations and businesses and have turned myself into a role model for other young people who might not have taken the orthodox path to success. My foundations focus on giving children and young adults access to opportunities to learn new skills and broaden their horizons @futureleadersinspired…”

“Roald Dahl once quoted ‘If you have good thoughts they will shine out of your face like sunbeams and you will always look lovely.’ — To me, this is a powerful quote.”

“I have always struggled with mental health for a big part of my life. Ever since I was in high school, maybe even years before that, I’ve dealt with anxiety. Now being a first time mother my anxiety has gotten much worse… Society needs to wake up and realize just how many women and people go through this on a daily basis… I love that I’m a woman and I can stand up for others who feel this way. What makes these challenges easier for me is having a great support system and knowing that I have to continue improving for my daughter… knowing that you have someone there for you can ultimately make the difference. Be there for someone, spread love.”

“I’ve experienced some emotionally draining stuff growing up which made me fall into an on-and-off depression… Everyone has a way of dealing with things they encounter, some people are naturally strong and have thick skin and so they’re able to handle a lot of things which people with unstable mental health have a hard time doing… it doesn’t matter how strong you are because we’re all human, and at some point we’ll definitely breakdown. Therefore, we could all use some help at that point. The beach brings me peace and I feel a lot better anytime I go there with a heavy heart… Acknowledgement of change makers helps us as individuals and the world because they serve as the bridge between brands and the global majority by making each and every one of us feel heard, and that we’re not alone in this…”

“Some paths are seemingly easy, and some can be more treacherous than others. For me, my path is still evolving, and I am happy to conclude I am never lonely on my path… Wherever I go, I want to make the path easier for the people around me… I’m no guru on mental health, but on the days where my mental health is declining, I create. I typically paint but just creating anything in general can help tremendously. From painting, doodling, making music, really anything. I also find it best if you try not to “judge” yourself while creating, the goal is to get out any feelings or thoughts you have… Whatever I create, I find later that it’s a reminder to me that I can keep moving forward no matter how tough it can get.”

“I’m aware of what sets off my anxiety and through experiences know what strategies to use and be intentional to keep it under control. Reaching out to family and friends, so I’m not alone, is another way to be proactive.”

"We Are the Earth": How Cooperation with Indigenous Communities Can Change the World
The Australia Fires: A Letter from Clare Press in Sydney
Wilson Oryema: How the 'Regenerative Futures' Program is Redefining Global Sustainability
Redress Founder Christina Dean: The Woman Redefining The Words 'Made in China'